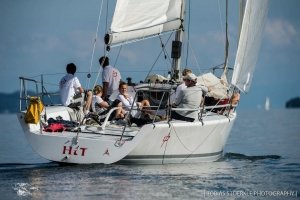 Amongst the first production boats of its kind, this extraordinary performer is built using technology previously only used for one-off custom boats. This ground breaking methodology results in a powerful, super-fast, one design race yacht, with uncompromising up and down wind capabilities.

The yacht is designed for maximum thrills and excitement while remaining simple to sail, in both inshore and ocean racing events.

With a carbon interior, carbon spars and without running backstays, this boat is at the cutting edge of performance racing!

Although only 37 feet in length, weighing only 3550 kilograms and with a ballast ratio of close to 60%, this racing yacht holds her own against the best. Being smaller in size, the yacht is both economical and affordable, yet is destined to be on the winner’s podium at all the International racing events, be it in round-the-bouys or ocean racing.

The G-Force X-Treme 37 was built for speed and simplicity. She is built entirely in carbon and is considered to be one of the most technically advanced production boats ever built. All conform the latest technical specifications and standard features of a modern high-tech production boat.

Designed by the world-famous yacht-design partnership of John Reichel and Jim Pugh, G-Force X-Treme 37 has been designed to the most exacting standards to be powerful and fast both upwind and downwind.

Brief to the Reichel-Pugh design team was that the yacht be not only robust and long lasting, but also really simple to sail. Hence, the yacht is totally uncompromising in terms of fun, thrills and excitement. This 37-foot Production Fixed Keel Racer, 37, is built entirely in carbon, including the mast, boom and spinnaker pole and even the interior, while state-of-the-art specifications have demanded that only the highest quality and most exotic materials available have been used throughout.

With close to a 60% ballast ratio, the yacht will surf at speeds in excess of 25 knots. There are no running back stays and no overlapping headsails. The deck layout is standardised and streamlined to a degree of such supreme simplicity that it will be an absolute pleasure to step aboard and cast off. The design also allows for easy interior layout conversion for either day sailing or ocean races.

The result is a very powerful, super-fast racing yacht, downwind and upwind – ideal for both inshore and trans-ocean racing events.